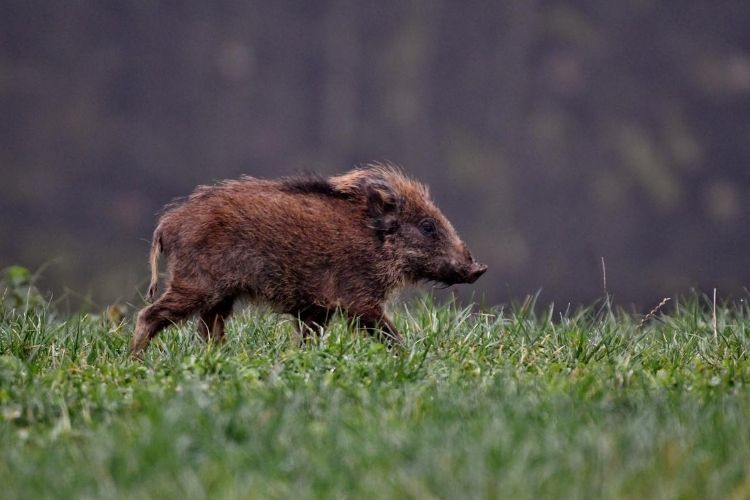 I love hunting hogs and hogsare something that must be hunted. In the South, hogs are a real problem. I say there’s two different kinds of places: there’s places that have hogs and places that will soon have hogs because hogs are just moving so much. What the deal is about hogs is 50 years ago, we didn’t have hogs in much of the South like we have now. What happened was pork prices went so far down that the farmers didn’t want to keep their hogs so they just turned them loose and hogs adapted very well. The problem with hogs is that they adapted too well. They can live anywhere and they can live on anything They’re kind of like coyotes. They can root around. They eat anything they want to eat and they’re destructive. They destroy habitat. They destroy farm fields. So, farmers don’t like them. They eat turkey eggs and quail eggs and they’re just destructive. I mean people say that they’ve found a white-tailed fawns that they wound up killing, they go through fences. Hogs multiply rapidly. I hear a lot of stories of these hogs where people say a hog will have 8-10 babies. Well, let me tell you something: I’ve killed 100s or maybe as many as 1000 hogs and, I can tell you something, it’s very rare to find a sow that has more than 6 babies in it. I’ve had one that has 7 babies in it and I mean that I’ve seen a lot of them. So, when you hear the stories about people saying that they have 8-10-12 babies, I kind of question that but they do have lots of litters. A cool thing about a feral hog: they get big fast and within a year or if they have enough nutrition, they’re going to be 100lbs. I mean, they’re going to be 100lbs and that’s a lot of meat to put on the ground. Many areas, there’s no limit on hogs. You have to have a hunting license in most places but it’s not a game animal so you don’t really, in Texas where I live, you don’t even have to have a big game license. It’s just a non-game license. Hogs range anywhere from Texas all the way up to Oklahoma. They’re in Kansas, Missouri, some places in Ohio now have them. I’ve heard places in Michigan have them. I say there’s two different kinds of places: places that have them and places that soon have them. So, feral hogs are a nuisance in many areas. A lot of people hate them but hunters that I know, they love them because we love to hunt them and we love to eat them. As far as the best time of the year to hunt them, I like hunting hogs when there’s not a lot of natural forage for them. So, late in the winter, when the fields have already been picked and the hogs and the deer and everything else has pretty much eaten the grain out of the field and there’s not a lot of greenery out there, that’s the best time I like to hunt them.

A hog has got pretty decent ears. He’s got pretty decent eyes. He can see movement but he’s got an unbelievable nose and it’s for that reason that, if you’re going to be a hog hunter, you better be concerned about your scent because I promise you, you may be able to get away with a white tail maybe smelling you a little bit and then coming back but I can promise you, if a hog smells you, he’s not coming back. A hog, for whatever reason, I mean they can put their nose in the most awful smelling stuff and they can still smell a human being. So, do everything you can to reduce human odor and hunt with the wind in your face. Always, if you can do that, that’s a good tip.

If you’re going to hunt hogs, I want to encourage you to respect them. Hogs are smart. If you pressure them too hard, I talked about if they smell you, you’re not going to get a second chance but if you pressure them, if they know you’re there, you’re not going to get a second chance. So you need to be quiet , you need to move slowly, good camouflage, I like to wear that but the deal is, about a hog, when people pressure them too much, they become nocturnal and hogs love coming out at night but, hey, where are most hunters at night? They are at home in bed. Ok? It’s for that reason that we get this night vision or thermal vision equipment and we have been extremely effective because, now, when the hogs are coming out to do their destruction at night time, feed around all these fields or move around, that’s when we come in and we do it with this night vision/ thermal vision equipment and it’s absolutely phenomenal.

Let’s talk about shot placement. Shot placement on a hog is something that, I don’t think , anybody wants to wound an animal and a hog is built like a little tank. The very front end of a hog, I mean the front end of the hog is deep because of the chest and the hog basically has no neck. The back end, the butt end, is kind of small. Well, the sweet spot, where you want to shoot the hog, is the chest, up high and up in the heart area. I think too many people wind up shooting them too far back like a white-tailed deer. So, you want to shoot them kind of forward and I like shooting them a bit low compared to a white-tailed deer because that way I can put it in the heart. I like to make a shot, especially, with an arrow What I wind up doing, I like to get a broadside shot. I don’t like shooting one that’s facing me, with an arrow. I want to get a broadside shot so I can go straight through it. Many times I’ll wait until it opens up, like this, with one leg, so I can get past that shield on one side and put an arrow through it. As far as mechanical or fixed blade broadheads, I mean, it’s a preference for me. Some people prefer one over the other. Shop placement is everything. Let’s see what else. If you’re a rifle hunter, on a feral hog, the best place I like to shoot them is right between the eyes or right into the base of the ear. When you do that, there is no tracking, they go down instantly.

Let’s talk about effective range and how far you ought to be when you hunt hogs or when you hunt any animal. First off, I want to encourage you to become very proficient with whatever you’re shooting, whether it is a bow, a handgun, or a long gun. Become knowledgeable about what your limitations are and also what your equipment’s limitations are. All too many times you’ll see videos online or you’ll go on tv and you’ll see these guys making long distance shots and they do so very effectively and it makes it look easy. It’s not easy. Those guys, that are doing that, spend a lot of time becoming very good at it and, so, don’t think you, as a beginner or even a novice, can reach out there and do that kind of stuff because the last thing you want to do is wound an animal. If you’ve never done that, it’s a bad feeling, it’s a sick feeling. So, what I would encourage you to do is make sure and pay attention to their nose, their eyes, and their ears and you want to get as close as you can, ok, if you can. As a bow hunter, I like to get 20-30 yards just because at 20-30 yards, I know I can hit a very small target. With a rifle, I encourage people, if you’re shooting a small target, you’re shooting at the base of the ear, you’re shooting in between the eyes to drop him instantly, I mean, get close. So, you want to respect their sense and you want to get close. So, I’d encourage you, don’t take long distance shots at stuff unless you have to, unless you’re prepared, you know what you’re capable of and you know what your equipment is capable of.